Journalists in State of Emergency – 6

Two of the journalists who were detained as part of Turkey’s post-coup attempt investigation delivered initial testimony at the Istanbul Prosecutor’s Office on August 2.

Both journalists were referred to court with prosecutors demanding their arrest. Fox TV News Editor Ercan Gün, was let go on probation by the court, only to be detained again in less than a few hours as part of an investigation into the 2007 murder of Turkish-Armenian journalist Hrant Dink. The business editor of the defunct Zaman daily, İbrahim Balta, was put under arrest.

Also on Tuesday, State-run Anadolu News Agency (AA) released a wrap-up of the detentions and arrests of the past few days, reporting that 49 out of the 89 journalists for whom detention arrests have been issued are still wanted. Police has established that 11 of those journalists have left Turkey. The agency’s report offered a summary of two detention warrant lists targeting mainly Zaman journalists; the number of journalists who are wanted – or were wanted at some point – in the investigation is at least 108.

In another development, P24’s Legal Unit announced plans to file an objection against the arrest ruling for Şahin Alpay, a former Zaman columnist, arrested on July 30. P24’s Legal Unit has assumed the role of legal counsel for Alpay.

Representatives of P24’s Legal Unit and Reporters Without Borders (RSF), who have been visiting journalists detained under suspicion of involvement in the coup at the Police Department, have said that a majority of the journalists in detention are having a tough time finding a lawyer. Concerns about the health of the journalists have also been expressed by various observers.

Posts stating that two former Zaman journalists, Emre Soncan and Haşim Söylemez, who were both arrested in the probe, have serious conditions that call for continual medical attention. 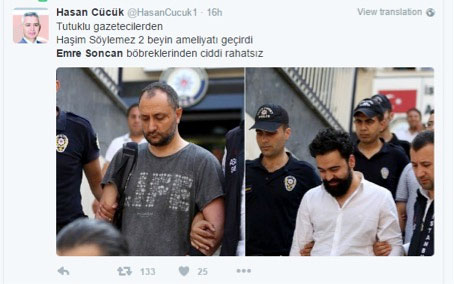 State of Emergency detentions and arrests outside the coup probe

Two Kurdish journalists were arrested and a newspaper delivery man was detained on Aug. 2.

Reports said that Hülya Karakaya, the Managing Editor of the Özgür Halk magazine, was detained earlier in the day at Diyarbakır Airport, and was later arrested on charges of “membership in a terrorist organization” at Diyarbakır Police Department’s Counterterrorism Bureau.

Dicle News Agency (DİHA) reported later in the day that one of its reporters, Mehmet Arslan, was also arrested on charges of membership in a terrorist organization.

These lists have been compiled by P24 editors from open news sources and will be updated regularly. Journalists who want to report developments about themselves or their colleagues can contact us at punto24info@gmail.com
03-08-2016
Share: