Journalists in State of Emergency - 5

Seven journalists testified to prosecutors on July 30 as part of the investigation into journalists in the wake of the failed coup of July 15. Former Zaman columnists Şahin Alpay, Ali Bulaç, Ahmet Turan Alkan, Lale Kemal, Nuriye Akman and Mustafa Ünal were put under arrest and sent to prison under a single court order. Another Zaman columnist who testified on July 30 was released after questioning by the prosecutor without being referred to court.

The latest arrests bring the total number of journalists who have been imprisoned in the investigation launched after the July 15 coup attempt to 29, while the number of arrested journalists, including those imprisoned for non-coup related charges, across the country rose to 62.

Şahin Alpay, who has been in custody for four days, testified to police officers at the İstanbul Police Department on July 30 at noon in the presence of a lawyer appointed by the İstanbul Bar Association, as the authorities failed to notify his lawyers. A petition submitted earlier by the journalist’s lawyer and family asking prosecutors not to delay his questioning citing health reasons had been rejected by the prosecutor’s office.

On the evening of July 30, Alpay and former Zaman columnists Ali Bulaç, Ahmet Turan Alkan, Nuriye Akman, Lale Kemal and Mustafa Ünal were referred to court by prosecutors demanding their arrest. The court ruled to arrest the six journalists.

Case against Dumanlı and his flight condition basis of ruling

The arrest ruling issued by the court does not level charges of membership in FETÖ (the Fethullah Gülen armed terrorist organization) or coup plotting against the journalists.

However, the court has grounded its decision to arrest the journalists on their continuing to write for Zaman, in spite of a court case launched against former Zaman Editor-in-Chief Ekrem Dumanlı, where he was charged with membership in a terrorist organization.

The court also noted that Ekrem Dumanlı had managed to flee the country, in spite of a probation order issued for him; and implied that based on Dumanlı’s precedent, all six former Zaman journalists are also a flight risk.

The court’s ruling also emphasized that the journalists had used expressions that “praised” FETÖ and attempted to “excuse” the coup attempt in their writings and social media posts.

Below is the full text of the final part of the decision in which the court explains the grounds for arresting the journalists.

A translation of the formally announced rationale behind the decision of the 4th Criminal Judicature of Peace to arrest six former Zaman columnists on July 30, 2016

(The run-on sentence structure has been left as is, with minimal changes to ensure intelligibility where necessary. The words in brackets were added by P24 for clarity of meaning.)

“The suspects have been referred [to the Judicature] with [prosecutors] demanding their arrest on charges of membership in an armed terrorist organization; [it has been understood] that the suspects wrote articles in the Zaman Newspaper, which -- as a result of the investigations launched following the rebellion of elements within the armed forces that are members of the FETÖ/PDY armed terror organization against the country’s [central] administration, its administrators and constitutional agencies and as a result of prior investigations-- was discovered to be part of this [FETÖ/PDY] structure; that [the suspects wrote articles] praising this structure and have written articles criticizing the investigations launched by the police department and by judicial authorities that [sought to] undermine this investigation; that they have continued to write their articles [in Zaman] in spite of a court case launched against [Zaman] executive Ekrem Dumanlı on charges of membership in an armed terrorist organization; for this reason [it can be inferred that] they continued to remain within the same structure although they knew about the presence of armed elements within this structure; that especially even after the process better known as the December 17 process [the December 17 corruption investigation implicating four AKP ministers and Erdoğan’s family], their articles praising this structure continued [they continued to write these articles] with persistence and that [the suspects] conducted propaganda activities in accordance with the aims of this organization; and that they have continued contributing [to spreading this propaganda] from their social media accounts; that they have written articles that attempted to justify the rebellion and that [suspects] made statements in defense of the members of this organization, creating a public perception of their [the coupists’] innocence, that they continued their contributions [to FETÖ propaganda] despite the presence of the organization’s armed elements having been exposed on the night of July 15, 2016 and despite the presence of strong [believable] accounts and information prior to that that this organization was planning an armed uprising; that the newspaper where they worked was shut down for belonging to this structure; and that the accusations leveled against the suspects constitute an offence treated by Article 100 of the Criminal Procedures Code (CMK) as reason for arrest, and also due to many of the suspects in the investigations into the media arm of this investigation have fled [Turkey]; primarily the former executive [of Zaman] Ekrem Dumanlı, [who is] accused of the same crime, fled to a foreign country in spite of judicial probation measures in place for him; that State of Emergency remains in place in Turkey regarding these accusations and the process of gathering evidence [for the investigation] is still underway; it has been understood that probation measures would be insufficient in case of [these] suspects, and that they shall all be individually arrested under CMK 100 and consecutive [CMK ] articles”

Meanwhile, former Zaman Washington Bureau Chief Ali H. Aslan claimed that families of those journalists who are on detention lists but are believed to have fled Turkey have been facing threats of detention themselves. 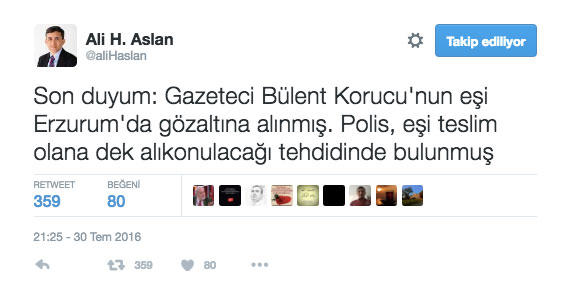 Aslan also tweeted that the spouse of former Zaman Executive Bülent Korucu had been detained, with authorities allegedly saying she would not be released until Korucu turned himself in. 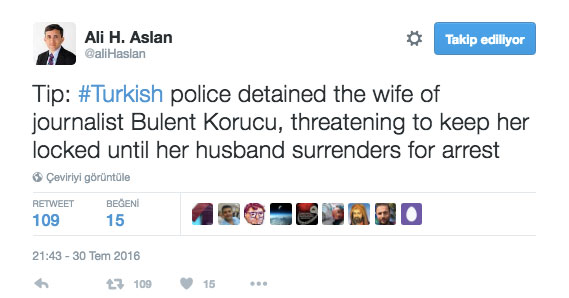 Ahmet Memiş, Haberdar, In custody, Unconfirmed reports that he might have been arrested

Hilmi Yavuz, Former  Zaman columnist, Released due to health reasons, will testify at a later time

Mustafa Ünal, Referred to court with prosecutor demanding an arrest

Zeki Önal, wasn't taken into custody due to poor health and advanced age, his home searched during probe

Journalists arrested under State of Emergency, outside the coup probe

Detain / Place in custody – To hold in police custody for police interrogation first, and later for testimony to a prosecutor. Might lead to a court appearance depending on the action taken by the prosecutor.

Released on probation – Released with an international flight ban issued. Usually entails checking in regularly with a designated police station.

These lists have been compiled by P24 editors from open news sources and will be updated regularly. Journalists who want to report developments about themselves or their colleagues can contact us at punto24info@gmail.com
31-07-2016
Share: