Journalists in State of Emergency – 8

Several journalists, who have not been detained in the ongoing investigation into the July 15 coup attempt, have said authorities have canceled their passports.

In a related development, the daughter of Şahin Alpay, a former Zaman columnist arrested in the post-coup probe, said her passport had been confiscated by police at Atatürk Airport and she had been prevented from departing for Kosovo on August 5. Elvan Alpay, who is an artist and was due in Kosovo to participate in an art show, said authorities had not told her the reason for confiscation.

Hayko Bağdat, a columnist with the independent news site Diken, tweeted on Aug. 6 that his passport had been confiscated while re-entering Turkey after a trip to Greece. Following his announcement, Republican People’s Party (CHP) deputy Selina Doğan announced that passports of all registered journalists were canceled as a precautionary measure, basing this information on accounts of officials at the Istanbul Police Department. Doğan’s announcement couldn’t be confirmed immediately. On Aug. 9, Hayko Bağdat said police returned his passport following involvement of CHP deputies. 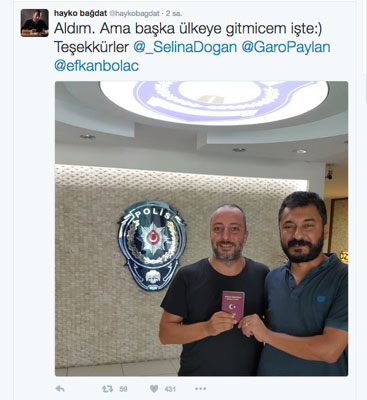 However, Bağdat announced that he was called in to the Police Department to testify a few hours after his passport was returned. He said he believed the call was related to an “insult” investigation, indicating that he was potentially called to testify regarding possible charges of “insulting the president,” criminalized under a Turkish Penal Code (TCK) article which has been used extensively in recent years against writers, journalists, activists and social media users.

There have also been reports that Today’s Zaman’s former Editor-in-Chief Sevgi Akarçeşme’s and Cumhuriyet’s Editor-in-Chief Can Dündar’s passports have been canceled. Both journalists are currently abroad.

It wasn’t immediately clear whether the de-facto ban on Elvan Alpay could be a sign of a general policy targeting all relatives of the journalists who are being investigated in the post-coup probe, but there have been allegations of other forms of arrestment.

Earlier, the son of former Zaman columnist Bülent Korucu – who is wanted in the investigation – claimed that police had detained his mother hostage. Korucu’s wife Hacer Korucu was put under arrest on Aug. 9, and authorities have been mum on the charges against her. The couple’s son, Tarık Korucu, said she had been arrested for attending activities organized by the Fethullah Gülen community in the past. He also claimed that the family was told openly that she would be released if Bülent Korucu turned himself in. 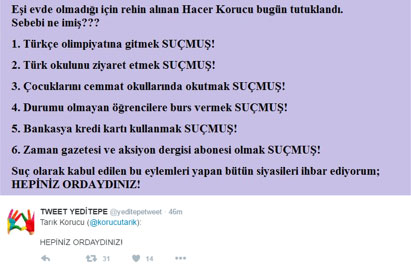 Several Kurdish journalists, including the Co-Editor-in-Chief of Özgür Gündem Eren Keskin, also said their passports had been canceled under Emergency Rule conditions.

Daily Evrensel reported on Aug. 9 that the 14th Criminal Court demanded the cancellation of passports held by the above-mentioned journalists and lawyer.

Spanish journalist Beatriz Yubaro was deported on Aug. 9 according to media reports, with officials offering no formal explanation on the reason for deportation. In a related event, Diken columnist Amberin Zaman reported that US journalist Lindsey Snell had been arrested after being captured by Turkish security forces in Hatay province, near the Syrian border. Turkish officials have accused Snell of being a spy for the US government.

On Aug. 10, Şermin Soydan, a reporter for the Kurdish DİHA news agency, appeared before a court facing life in prison for reporting on a secret operation conducted by security forces. Soydan was taken into police custody on May 14 in Hakkari.

International and domestic journalists’ unions and journalists have protested against the life sentence demanded for Soydan.

On Aug. 9, in an unconfirmed report, DİHA reporter Evrim Kepenek tweeted that DİHA reporter Mesut Kaynar had been taken into custody in İstanbul.

42 journalists have been arrested in the coup investigation. According to the Platform for Solidarity with Journalists Under Arrest, currently 76 journalists are under arrest*.

* US Journalist Lindsey Snell, arrested by Turkish authorities on espionage charges, is not included in this total.

These lists have been compiled by P24 editors from open news sources and will be updated regularly. Journalists who want to report developments about themselves or their colleagues can contact us at punto24info@gmail.com
10-08-2016
Share: