Journalists in State of Emergency - 56

Thirteen suspects, most of whom are writers and journalists, accused of working as the media arm of an organization called Ergenekon, were acquitted from all charges in a landmark press freedoms case in Turkey in a trial session on April 12.

The OdaTV investigation -- also the name used to refer to the trial -- began in 2011, with police raids on the houses of the accused. There were initially 14 defendants in the ensuing trial. One of the suspects, Kaşif Kozinoğlu, a National Intelligence Agency (MİT) employee, died while in prison.

Another defendant, journalist Ahmet Şık, is currently imprisoned in relation with an ongoing trial to the Cumhuriyet daily.

The suspects – accusations against them mostly based on news stories published by the news website OdaTV -- were charged with establishing an armed terrorist organization, membership in an armed terrorist organization, acquiring confidential documents pertaining to state security, violating personal privacy, illegally recording personal data and attempting to influence a fair trial process.

The trial lasted six years, with many of the suspects remaining in prison between a year to one year and a half.

In his closing statement, journalist Şık, who was brought from Silivri prison for the trial, said: “This Courthouse has become the grave of justice.”

Journalist and writer Soner Yalçın and others demanded that the civil servants and bureaucrats behind the conspiracy against them be tried.

The prosecutor who launched the investigation, Zekeriya Öz, is wanted in an investigation into the Fethullah Gülen network, which Turkish officials say orchestrated the coup attempt of 15 July. He is known to have fled the country.  The chief judge in the OdaTV trial, Mehmet Ekinci, was detained on 27 January in Yalova province in the Gülen investigation.

Journalists detained a second time to testify on April 13

The thirteen journalists who were detained in supposedly a new investigation in less than a few hours after being released in a coup-attempt related trial on March 31 began testifying to prosecutors on April 13 as part of the new investigation, a lawyer for two of the suspects tweeted one day prior. The suspects have been in police custody -- following seven months in prison for most of them -- since April 1. 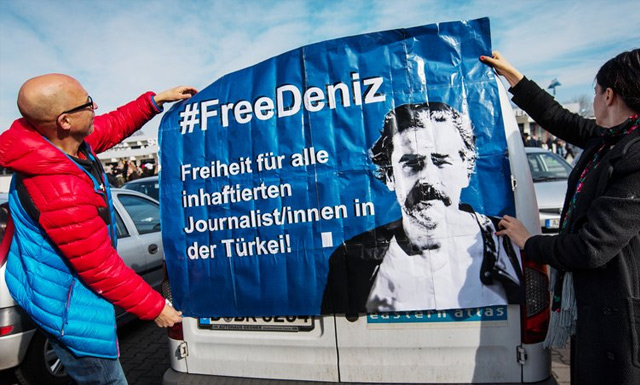 His lawyer and a Republican People’s Party (CHP) deputy attended the wedding ceremony.

The journalist has been in prison since Feb. 27, arrested on charges of spreading terrorist propaganda and inciting the public to hatred and hostility.

Journalists arrested under State of Emergency as part of coup investigation

Journalists taken into custody as part of coup probe

testify later in the investigation

İhsan Duran Dağı, Zaman columnist, Released after being questioned by

Released after being questioned by prosecutor

after being questioned by prosecutor

Zeki Önal, Not detained due to advanced age and poor health

Journalists being sought in coup probe by judiciary

Müjgan Ekin, Özgür Gün TV - Believed to have been abducted in extrajudicial detention

Journalists arrested during State of Emergency outside coup probe

Mehmet Bozkurt, former Aydınlık editor, released on Feb. 1, 2017 after one day of arrest

Sevan Nişanyan Still in prison (Not included in total count due to the nature of the charges against him).

Outlets allowed to resume broadcasts after being shut down under SoE: Zarok TV (must comply with new requirement of 40 percent of broadcasts in Turkish), Yön Radyo.

These lists have been compiled by P24 editors from open news sources and will be updated regularly. Journalists who want to report developments about themselves or their colleagues can contact us at punto24info@gmail.com
13-04-2017
Share: