Journalists in State of Emergency – 12

Aslı Erdoğan, a columnist for the shuttered daily Özgür Gündem and a member of the newspaper’s advisory board as well as a world-renowned writer, was arrested on Aug. 19 on charges of “propagating for a terrorist group,” “membership in a terrorist organization,” and “inciting the public to armed violence.”

In her testimony to prosecutors, Aslı Erdoğan said Özgür Gündem’s Advisory Board is a “symbolic” body and her name appearing daily on a list of the newspaper’s editors in print – a legal requirement for newspapers in Turkey – was only a bureaucratic formality, Cumhuriyet reported. In her testimony, Erdoğan said: “I started writing columns for Özgür Gündem in March or April of 2011. As a writer, I have seven published novels, which have been translated into 15 foreign languages. I also write regularly for the literary journals Fil and Kara Karga. I have no links to any terrorist organization in any shape or form. The advisory board has no authority to decide on contributors or the newspaper’s editorial policy. My name appearing on the list of editorial staff is a complete formality. I deny all the charges leveled against me.”

In a related development, journalist Fehim Işık suggested in a tweet that the judiciary was widely divided on Erdoğan’s arrest, and she had been deliberately referred to a prosecutor who was most likely to arrest her. 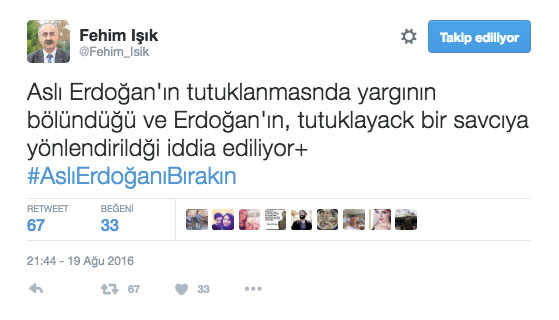 Also on Aug. 19, the former editor-in-chief of Özgür Gündem, Eren Keskin, whose home was raided on Aug. 16 after newspaper’s closure, tweeted that she had made an appointment with the Bakırköy Prosecutor’s Office to testify on Aug. 23, hinting that she also expected an arrest. 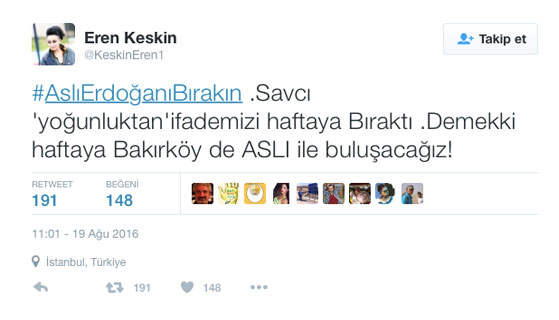 Twenty two out of the 25 journalists who were taken into custody on August 16, on the same day as Aslı Erdoğan was taken into custody, in an operation targeting Özgür Gündem were released on August 18. The newspaper’s Editor-in-chief Zana Kaya and Newsroom Editor İnan Kızılkaya are still in custody.

The 22 journalists who were released on Aug. 18 told prosecutors that they had been subject to maltreatment and torture at the hands of the police. Gülfem Karataş, an İMC TV reporter who was at Özgür Gündem’s office to report on the raid, said she had been beaten up with a chain and had been threatened with rape by detention officers. Karataş’s statement was included in her official testimony at the prosecutor’s office.

Other arrests and release decisions in non-coup related investigations

In operations targeting journalists outside the coup probe, DİHA Lice reporter Metin Bekiroğlu, who was detained on Aug. 15, was put under arrest on charges of “membership of a terrorist organization.”

On August 18, two other journalists were released. Meltem Oktay, a DİHA reporter, who was taken into custody on April 11 and later arrested on April 14 – months before the State of Emergency declaration --- on charges of “membership in a terrorist organization.” was released. ETHA journalist Fatma Edemen, who was ddetaine don Aug. 15 in the capital, was released on probation also on Aug. 18.

Latest in the coup probe

On Aug. 18, four of the 43 TRT employees detained on Aug. 11 were released by the prosecutor’s office, which referred the others to court. A court has ruled for the arrest of 19 of the TRT journalists and ruled to release the other 20 on probation. No names were shared and the exact titles of those under arrest are currently unkown.

Şermin Soydan – DİHA (arrested before the declaration of the State of Emergency), Under arrest

These lists have been compiled by P24 editors from open news sources and will be updated regularly. Journalists who want to report developments about themselves or their colleagues can contact us at punto24info@gmail.com
20-08-2016
Share: