Journalists in State of Emergency - 87 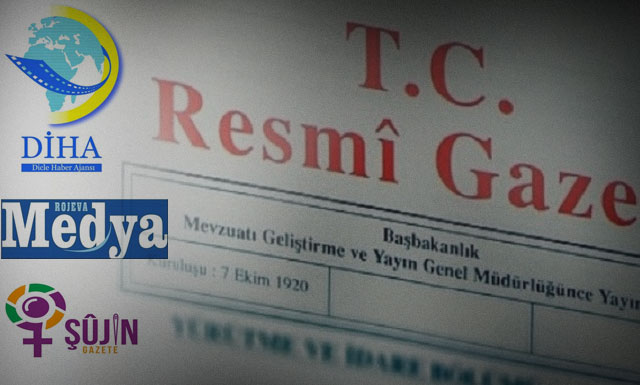 Mete was detained earlier in the day by plainclothes officers while she was distributing copies of the newspaper. Information on the reason for her detention and the location where she was taken  wasn’t immediately available.

After her police interrogation, she was referred to the İzmir 2nd Criminal Judgeship of Peace by the prosecutor on charges of "membership in a terrorist organization" and "spreading propaganda on behalf of a terrorist organization." In her statement, Mete said she was distributing a legal newspaper, denying the accusations against her. She was put under arrest by the judgeship on the grounds that she is a flight risk.

Total number of newspapers, magazines, publishing houses, TV and radio stations shut down under Turkey’s State of Emergency declared on July 20, 2016 has reached 187.

The new decree also shut down the associations Mavi, located in Batman, the Kuran Lovers Association (Antalya) and Antalya Çağlayan High School Alumni Association. The total number of associations shut down under State of Emergency has reached 1128.

On August 25, journalists from various organizations gathered to make a statement against the closures.

On August 19, Dihaber reporters Sadiye Eser and Mehmet Şah Oruç were taken into custody by police officers who stopped the two reporters outside the People’s Democratic Party (HDP) office where they had visited to cover a press statement. The two reporters resisted when the police attempted to seize their cameras.

The dihaber reporters were then taken to the Taksim Police Station. They were released after the images on their cameras were seized by the police.

Trials where journalists are accused

On August 23, journalists Oktay Candemir and Necdet Tam appeared before a Van court on charges of “spreading propaganda for a terrorist organization” in their news reports.

Tam was acquitted in the session. The next hearing in the trial will be heard on Sept. 19.

An indictment into Aydınlık newspaper’s Editor-in-Chief İlker Yücel and former investigations editor Ceyhun Bozkurt was brought to completion on August 22. The indictment accuses the journalists of publishing “state secrets” in regards to a story where Aydınlık printed a photograph showing ammunition laden trucks operated by the National Intelligence Agency (MIT), that were allegedly en route to Syria.

The indictment seeks between five to ten years for the journalists for publishing classified documents.

Access has been blocked to news reports featuring a photograph of Ali İhsan Horasan –  the judge who ruled for the arrest of Republican People’s Party (CHP) Enis Berberoğlu.

Horasan is pictured in the photo in the blocked news reports making the Rabia gesture, a hand sign used by supporters of Muslim Brotherhood in Egypt and by the followers of Recep Tayyip Erdoğan in Turkey, sitting around with several other people who seem to be drinking alcohol.

CHP deputy Berberoğlu was imprisoned by Horasan’s order for his alleged role in disseminating photos that seem to suggest that the Turkish government armed jihadi groups in Syria.

The access ban was introduced for the URL featuring the story at eight internet news websites, including www.cumhuriyet.com, www.medyafaresi.com, www.canakkaleolay.com and www.ilerihaber.org.

International criticism for Turkey’s use of Interpol

Several international organizations and individuals have spoken against what they say is Turkey’s “abuse” of the Interpol system, after Spain arrested a journalist and a writer, who live in exile due to their critical views.

Head of Spanish PEN International Elisabeth Asbrink accused Turkey of using the Interpol as an instrument to silence opposition.

OSCE Representative on Freedom of the Media, Harlem Désir, called on the Interpol to review Turkey’s requests for arrests of journalists.

On August 19, Spain detained exiled Turkish dissident and writer Doğan Akhanlı on an Interpol notice. Akhanlı was released under judicial control measures, but he is barred from leaving Spain for 40 days.

Journalist Hamza Yalçın, a socialist writer who resides in Sweden as a political refugee, was arrested in Spain on August 7, again on Turkey’s request. Yalçın remains in custody.

On August 29 German Chancellor Angela Merkel criticized Turkey’s use of an Interpol arrest warrant to detain Akhanlı, saying that this amounted to abuse of the international police agency.

The full list of journalists in prison in Turkey, as well as the list of organizations shuttered by Cabinet decrees can be found here.