Journalists in State of Emergency - 127 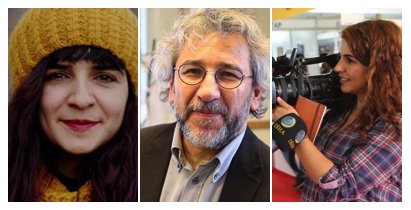 Sabuncu, Şık released pending the conclusion of Cumhuriyet trial; prison sentences handed down to all but one of the defendants in 26-suspect media trial

Cumhuriyet daily’s imprisoned editor in chief and P24’s founding member Murat Sabuncu and reporter Ahmet Şık, on March 9, 2018, were released after nearly 500 days in pretrial detention pending the conclusion of the ongoing trial into 20 journalists and executives of the newspaper.

For a detailed coverage of the March 9 hearing, monitored by P24 in the courtroom in Silivri, click here.

Twenty-five journalists were handed down prison sentences between two years and seven-and-a-half years at the March 8 hearing of the case publicly known as the “FETÖ media trial,” in which 26 suspects including journalist-columnist Murat Aksoy and musician-turned-columnist Atilla Taş faced “membership in a terrorist organization” charges.

A detailed report of the two-day hearing, monitored by P24 in the courtroom, can be found here.

The Public Prosecutor’s Office of Muş has issued the indictment against Seda Taşkın, a reporter for the Mezopotamya news agency who is under arrest since January 22, 2018.

Taşkın is accused with “conducting propaganda for a terrorist organization” and “membership in a terrorist organization” in the 47-page indictment, accepted by the 2nd High Criminal Court of Muş. In the indictment, Taşkın’s phone conversations with her news sources, her news reports and social media posts are shown as evidence for the accusations against the journalist.

Taşkın will appear before a court for the first hearing of this case on April 30.

Taşkın was initially taken into custody on December 20, 2017, in Muş on account of an anonymous tip, after which she was released under judicial control terms. The prosecutor objected to her release, leading to Taşkın’s re-arrest on January 22 in Ankara, where she gave her statement via the courtroom video-conferencing system SEGBİS to a court in Bitlis, which ruled to jail Taşkın on “membership in a terrorist organization” charges pending trial.

Taşkın has since been in detention on remand in the Sincan Women’s Prison in Ankara.

The Supreme Court of Appeals’ 16th Criminal Chamber has reversed the trial court’s judgment concerning the former editor in chief of Cumhuriyet daily Can Dündar and the newspaper’s Ankara representative Erdem Gül in the “MIT trucks case,” ruling that a penalty between 15 to 20 years should be sought for Dündar.

The 14th High Criminal Court of Istanbul had sentenced Dündar to five years and 10 months in prison and Gül to five years on the charge of “disclosing documents related to the security of the state” in relation with the publication of a news report about the Syria-bound National Intelligence Agency (MIT) trucks in the May 29, 2015, edition of Cumhuriyet.

In its review of that ruling, the 16th Criminal Chamber of the Supreme Court of Appeals held that in Dündar’s case, the verdict to be rendered should be based on “espionage” charges as per Article 328 of the Turkish Penal Code (TCK), and that Gül “should have been acquitted of the unprovable charge due to a lack of sufficient, substantial and convincing evidence that he had joined Dündar in committing the offense.”

TCK Article 328 stipulates that “a person who secures information that, due to its nature, must be kept confidential for reasons relating to the security or domestic or foreign political interests of the state for the purpose of political or military espionage shall be sentenced to a penalty of imprisonment for a term of 15 to 20 years.”

A court in Adana handed down prison sentences of three years, one month and 15 days each to two newspaper employees on March 9, 2018, on the charge of “aiding and abetting a terrorist organization” for distributing the Özgür Toplum magazine.

Karakaş and Yıldız did not attend the March 9 hearing, in which they were represented by the defense attorney Tugay Bek. The lawyer told the court that there was not a ban in place for the Özgür Toplum magazine and that an order to confiscate the magazine’s copies was issued after the arrest of his clients. Bek requested his clients’ acquittal. The court convicted both Karakaş and Yıldız on the charge of “aiding and abetting a terrorist organization.”

Journalist Hayri Tunç was taken into custody on March 7 during a midnight police raid on his Istanbul home on account of an anonymous “complaint filed in Van.” The journalist was released the next morning following his statement before the prosecutor.

Şerife Oruç, a reporter for the shuttered Dicle news agency (DİHA), was remanded in pre-trial detention in the fourth hearing of the trial against her and two other co-defendants on March 7, 2018, at the 2nd High Criminal Court of Batman.

Şerife Oruç and her two co-defendants, one of whom is Oruç’s cousin, Emrullah, have been in pretrial detention for 21 months now. They each face up to 15 years in prison on the charge of “membership in a terrorist organization.”

Şerife Oruç, in pre-trial detention at the Elazığ Prison, could not address the court during the hearing due to a connection error in the courtroom video-conferencing system SEGBİS. She was represented at the hearing by her lawyer, Mesut Aydın, who told the court that Oruç was being unlawfully held in prison without evidence since her arrest.

The court issued an interim decision at the end of the hearing, ruling for the continuation of the detention of each of the three suspects, adjourning the trial to May 8, 2018.

P24 has updated its list of journalists in prison in Turkey, a list compiled from open sources using information available to the general public.

Following the latest hearings of two of the major media trials in Turkey during the week of March 5-11, 2018, there are at least 153 journalists either in pretrial detention or serving prison sentences in Turkey’s prisons.

For a full list of all the imprisoned journalists in Turkey, visit this spreadsheet. Lists of all of the foundations and associations as well as media outlets shut down can also be found at the same link, although on different tabs of the same spreadsheet.
14-03-2018
Share: