Journalists in State of Emergency - 48 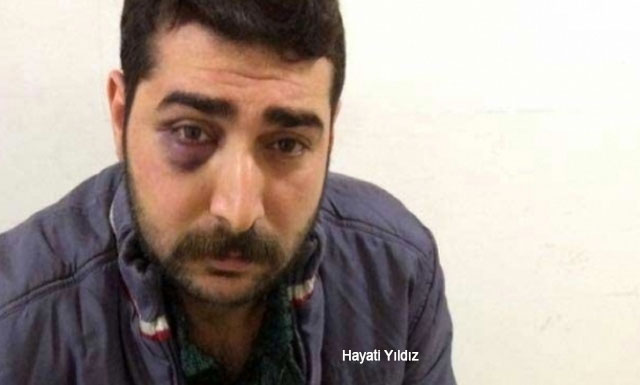 Azadiya Welat journalist Hayati Yıldız was arrested by a court on March 1. The journalist had been in detention since mid-February.

On Feb. 28, the Evrensel daily published a photo of Yıldız, showing bruises on his face.

The daily reported that medical records indicated the journalist was “severely beaten in detention and that his cheekbone had been fractured.” The news report also said Yıldız, who suffers from a chronic condition, was taken to a doctor, whereas he should have been taken to a hospital. Lawyers for Yıldız said the prison administration said they couldn’t take the journalist to a hospital due to being short staffed.

Yıldız, a journalist with the Kurdish-language Azadiya Welat daily, which was also shut down under State of Emergency, was detained by special operations police on Feb. 17 in Diyarbakır.

Mühirci, who had been imprisoned for seven months, was let go from prison following a court decision for his release. In a statement he made after walking out of prison, Mühirci spoke of arbitrary decisions by the prison administration that introduced restrictions to inmates’ lives. “Everything from our meals to our right to communication was being obstructed by arbitrary decision,” he said.

Aysel Işık, a reporter for the news agency JINHA, which was also shut down under State of Emergency, appeared before a court on March 1. She had been arrested on Nov. 21, 2016 on charges of “membership in a terrorist organization.” Işık denied the charges, saying her reports only sought to inform the public. The panel of judges ruled for her release.

The number of journalists in prison is 154 following the two journalists’ release and Yıldız’s arrest. The full list of those in prison can be viewed here.

Hasan Cemal, veteran journalist and president of the P24, was sentenced on March 1 to 11 months and 20 days in prison for insulting Recep Tayyip Erdoğan in a column. The sentence was postponed.

The column, titled “Tin-pot Dictator,” was based on a speech delivered by Kemal Kılıçdaroğlu, the leader of the main opposition Republican People’s Party (CHP), in Parliament. It was published on the news portal T24 in January 2016.

According to the ruling, issued by the Ankara 24th Criminal Court of First Instance, Cemal will be on probation for a year but no officer has been assigned to supervise him. His sentence will have been deemed executed if he completes this period “in good conduct.”

According to a report in Hürriyet Daily News, the ministry initially said on Twitter that State Secretary Walter Lindner had “summoned” the ambassador of Turkey, before clarifying that the envoy was “asked in.”

“It was not a formal summons, the Turkish envoy was asked in for talks,” it said in a second tweet.

Media tycoon to be brought to court by police force

On March 1, a Turkish court ruled for Doğan Holding Honorary President Aydın Doğan to be brought to a trial session by force.

Doğan, who owns Doğan Holding, a conglomerate with investments from media to energy -- has been charged with involvement in organized fuel smuggling between 2001 and 2008. There are a total of 47 defendants.

Recently, prosecutors launched an investigation into a news report published in Hürriyet, owned by Doğan Holding. The news story claimed that a group inside the Turkish military was unhappy about certain developments.
03-03-2017
Share: