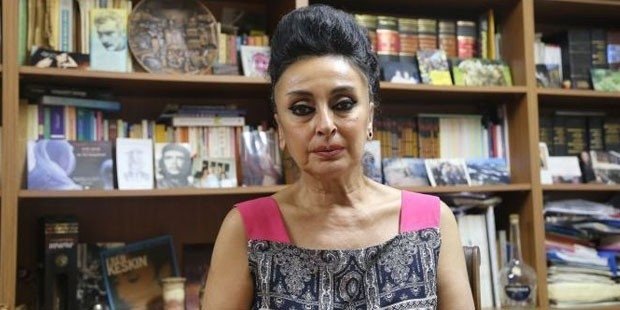 Lawyer and human rights defender Eren Keskin faces more than 120 separate trials for defending press freedom by having her name as a co-editor-in-chief on the masthead of the shuttered Özgür Gündem daily.

In two separate trials that concluded on 29 March 2018, Keskin was sentenced to 7.5 years in prison along with former Özgür Gündem managing editor Reyhan Çapan: one on the charge of “denigrating the Turkish nation, the Republic, and the organs and institutions of the state,” under Article 301 of the Turkish Penal Code (TCK) and the other for “insulting the president.”

Speaking during a press conference on 3 April 2018 at the Human Rights Association (İHD), Keskin said 79 trials against her have been concluded so far and that she has been sentenced to a total of 12.5 years in prison and fined a total amount of TL 456,000 (93,000 euros) in those cases. The total amount of the judicial fines upheld was TL 105,000 (21,400 euros). Among the 79 trials against Keskin that have been finalized to date, only four have been dismissed, due to either acquittal or the statute of limitations.

A travel ban against Keskin in the "Özgür Gündem main trial" was lifted by a decision of the Istanbul 23rd High Criminal Court on 10 October 2018, at the end of the 10th hearing in the trial, which began in 2016, when the pro-Kurdish newspaper was closed down by the government.

Keskin is indicted alongside eight other defendants, including writer Aslı Erdoğan and linguist Necmiye Alpay, both of whom were on the newspaper’s advisory board, as well as the newspaper’s former responsible managing editor İnan Kızılkaya and publisher Kemal Sancılı.

The charges in the “Özgür Gündem main trial” are “disrupting the integrity of the state and the unity of the nation,” “membership in a terrorist organization” and “terrorism propaganda.”

At the 16th hearing of the “Özgür Gündem main trial,” held on 14 February 2020, the 23rd High Criminal Court of Istanbul acquitted Necmiye Alpay, Bilge Aykut and Aslı Erdoğan of the charges against them. Eren Keskin, Zana Kaya, İnan Kızılkaya and Kemal Sancılı’s files were separated. Keskin and three of her co-defendants were granted additional time for their final defense statements.

Issuing their verdict after hearing the last words of Keskin and Kızılkaya, the court sentenced Keskin, Sancılı and Kızılkaya to 6 years and 3 months in prison on the charge of "membership in a terrorist organization.” The court sentenced Kaya to 2 years and 1 month in prison on the charge of "terrorism propaganda for a terrorist organization.”

Keskin appeared before the 14th High Criminal Court of Istanbul on 21 May 2019 for the final hearing of a trial where she was among 24 defendants -- including former Özgür Gündem editors and columnists -- facing the charges of “praising an offense or an offender,” “inciting an offense” and “disseminating terrorism propaganda.”

Keskin's lawyer Özcan Kılıç asked the court to merge the file against Keskin with the trial overseen by the 23rd High Criminal Court of Istanbul. Issuing their verdict at the end of the hearing, the court sentenced Keskin to 3 years and 9 months in prison for "terrorism propaganda." The sentence was not deferred.

In 2020, a new investigation was launched against lawyer and human rights defender Eren Keskin on the charge of “disseminating propaganda for a terrorist organization” over posts she shared on social media in 2015. Keskin went to give her statement at the Istanbul Chief Public Prosecutor’s Office on 12 June 2020 based on a summons. During her statement, Keskin said that her posts were within the context of freedom of opinion and freedom of expression and requested the prosecution to rule for non-prosecution.

The investigation resulted in an indictment, and the first hearing of this trial was held on 22 October 2020 at the 36th High Criminal Court of Istanbul.